Engine tuning is the process of modifying the operating characteristics of an engine. In a typical engine set-up, there are various mechanical and electronic elements such as the intake manifold, spark plugs, Mass air flow/ Volume air flow, etc. Modern engines employ the use of an ECM to provide the best balance between performance and emissions. Via the OBD communications protocol, the electronically controlled aspects of the engine can be modified in the process known as ‘mapping’. Mapping can either be performed by changing the software within the ECU (chip tuning via firmware modification), or by providing false data via plug-in hardware (piggybacking). Mechanical components can also be replaced, such as turbochargers or superchargers.

Other standalone engine management systems are available. These systems replace the factory computer with one that is user programmable.

Improper, incorrect and poorly executed engine modifications can have a detrimental effect on performance. Mechanical and electrical components will suffer or simply fail as a result. An example would be the use of an air compressor such as a turbocharger to increase the volume of air used in power stroke of the otto cycle. In a typical chemical reaction, the air-fuel ratio must be a minimum of 14:1 (see Stoichiometry). If higher ratios are used, higher pressures and temperatures are observed in the cylinders, which can quickly push an engine beyond its intended design limits. Neglecting such operating parameters can lead to premature failure, such as warped cylinder heads and walls (temperature related), disintegrated piston rings, cracked or bent connecting rods and crankshafts (excessive amount of torque applied), total cooling system failure, engine fire, engine detonation, engine seizing, and even blowouts. This can all lead to very expensive repairs, as well as being very dangerous. 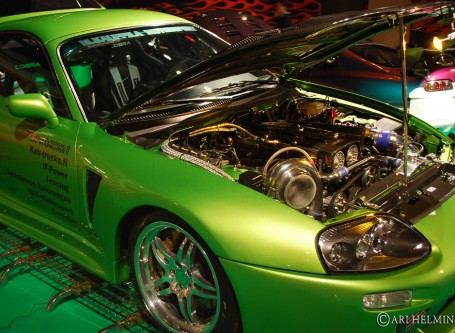